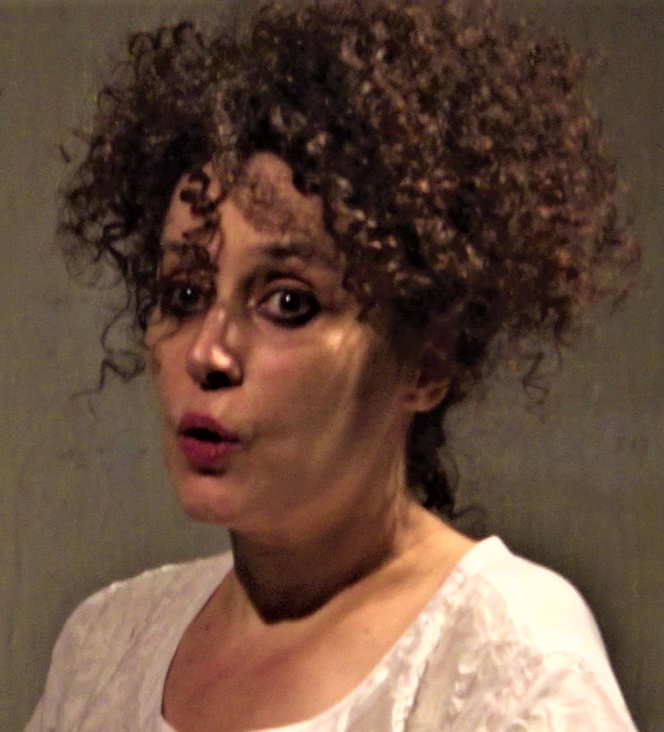 Poetry, theater, performance, visual arts… to translate the language of unconsciousness, dreams, folly … which are the obsessions and favorite themes of Catherine Gil Alcala.

Maelstrom, her erotic surrealistic poem, is staged at the Déchargeurs Théâtre (Paris 2010) and Avignon Festival.
Her play James Joyce flees… When a man suddenly knows something is staged at 59 Rivoli during the White Night 2012 in Paris.
She does a dolls-sculptures and poems’ exhibition Doll’art at Crazy Festival in Paris, at Arte Rainbow gallery in Dax, and at 59 Rivoli during the White Night 2013 in Paris.
She performs musical poems Fairy Tales In The Form Of A Running List at the Mana-Art gallery in Brussels, and at the Montparnasse Museum in Paris.
She participates as an author in the 35th edition of the « Bocal Agité » at Gare au Théâtre (Vitry 94) and she publishes at Éditions de la Gare A New Town, Life….

She published at Éditions La Maison brûlée in 2015 : James Joyce flees… When a man suddenly knows something followed by Chatter on the Chinese Wall, 2016 : The Tragedy of the Donkey followed by The Philosophical Farces and Zoartoïst and other texts, 2017 : The Somnambulist in a Sulfur Trail, 2018 : The Divinatory Crowd of Dreams.

At the same time, she participates in literary meetings and public readings, and she performs excerpts from her poems Zoartoïst and The Divinatory Crowd of Dreams, in Paris : at the Independent Publishers Fair, at the 104 bookstore, at the Gaston Baty Theater Library – New Sorbonne University Paris 3, at the Théâtre Les Déchargeurs, at the Theatrical Bookstore, at the « Ahz’art Day » as part of the Springtime of poets, at the Wind is rising Theater, at Quartier du livre Festival, and Aurillac Festival, at the Châlons-en-Champagne Library.

In the fall of 2018, she does performance readings of her play The Tragedy of the Donkey at the 100ecs during the White Night in Paris, and at the Independent Publishers Fair l’Autre Livre.

In 2019, she makes exhibitions of drawings and sound poems at Memory of the Future gallery and at the bookstore-gallery Time to read.
She performs Zoartoïst at the Mantsina on Stage festival in Brazzaville and the N’sala Company does a public reading of her play The Tragedy of the Donkey.

In 2020 – 2021, she performs her poems Dereliction of Art at the 7th Singular and Innovating Arts Biennale in Saint-Étienne, Zoartoïst and The Divinatory Crowd of Dreams at the House of Poetry in Avignon and at Balladines of Penne festival, at the International Festival of Writers and Artists in Val-David, Quebec, and at 10th edition of the Guadeloupe Poetry Festival.

She publishes in feminist poetry review « Le Pan Poétique des Muses », and she makes exhibitions at the House of Poetry of Avignon, the 9th Outside Norm Biennale in Lyon, and the 7th and 8th Singular and Innovative Arts Biennale in 2020 and 2022 Saint-Étienne.